It is with great joy that I inform you that Bill C-268 has finally passed the Senate of Canada!

I am so pleased that our country now has a law that assures significant penalties for those who traffic children. No longer will traffickers walk out of jail a week after being convicted.

I want to take a moment to thank you for the amazing support you have shown over the past year and a half. Tens of thousands of Canadians have voiced their support for Bill C-268 through petitions, emails, letters and phone calls. Your voice was heard!

We need to ensure that there are effective prevention initiatives in place and partnerships formed between federal and provincial governments to provide much needed protection and rehabilitation for victims.

I am sure you will join me in the next steps necessary to rid Canada of modern day slavery.

Again thank you for your support during this long journey. We are making a difference!

Yesterday, the Vatican issued a clarification of its canonical procedures for how dioceses should handle priests who sexually abuse children. As part of the statement, they have added that the “attempted ordination of a woman” has now been added to the list of “delicta graviora,” or most serious crimes in church law, alongside the sexual abuse of minors.

We, the undersigned, express our solidarity with Catholics who continue to seek equality, including those who practice feminist ministries and those who are ordained. We know these women and men to be firm in their faith and courageous in their work as they seek an inclusive and accountable church, undeterred by threats of excommunication or other canonical penalties. In addition, we stand with our brother priests and bishops who are also being threatened by this new policy for their support of women’s equality in the church. Furthermore, we take great offense that good faith struggles for gender equality could be misunderstood as a sacrilege and placed on par with the sexual abuse of children. In 1976, the Vatican’s own Pontifical Biblical Commission concluded there is no valid scriptural reason for denying ordination to women. Therefore, we welcome such efforts to expand the scope and variety of ministry and we celebrate women’s faithfulness despite huge institutional obstacles.

We are gravely disappointed that the Vatican would largely repackage its sexual abuse policy norms from 2001 in yesterday’s re-issued statement without adding many meaningful changes to canonical procedures on how to handle the sexual crimes of its religious leaders. We stand with survivors in calling for the release of the names of all credibly accused Catholic religious leaders and for the Vatican’s immediate adoption and implementation of global child protection policies. Nothing less is adequate to the crying needs of a community torn asunder by its own leaders’ crimes.

Association for the Rights of Catholics in the Church (ARCC), USA
Patrick B. Edgar, D.P.A., M.Div., President

CNWE Toronto members participated in a retreat led by Rita Patenaude followed by a videoconference AGM on June 5, 2010. For most of us it was our first experience of a videoconference, and while we missed seeing old friends from other places face-to-face, we were pleased to be able to reduce our Carbon footprint this way. 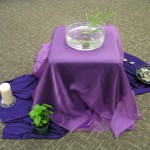 For three and a half decades members of the Catholic Network for women's Equality(CNWE) have shared a faithful commitment to social justice for all women.
Read More